Chinese New Year - The Year of the Monkey

Wallsend District Library turned red once again for Chinese New Year, celebrating the Year of the Monkey, the 9th animal of the Chinese zodiac. For two weeks, 8-20 February 2016, a dazzling array of monkeys greeted customers as they came in the door, leading them into the library (and to the return chutes). The customer service desk was artfully decorated with authentic Chinese motifs, which invited many comments and compliments from customers of all cultures.  Everyone enjoyed the festive atmosphere, and applauded the multiculturalism of the event. 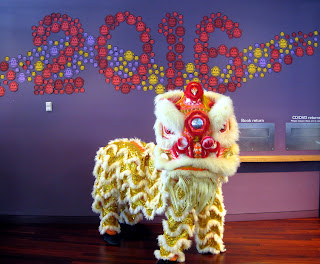 Characteristics of those born in the Year of the Monkey are honest , intelligent, flexible, sociable and lively, and some of those definitely applied to the various activities on offer, which were very well received by the community. We were very generously supported by the Confucius Institute at the University of Newcastle, an organisation that works to strengthen and expand exchange and cooperation between China and the local regions. 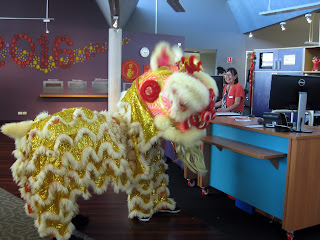 A Chinese/English bilingual storytime was held at two branches, with over 100 children and parents attending. Many families joined in singing the Chinese version of Twinkle Twinkle Little Star, and all enjoyed learning more about the Chinese culture, and the festivities traditionally held during Chinese New Year. The City Branch storytime was followed by a traditional Chinese Lion Dance, performed by four dancers from The Ching Nin Lion Team, which means young and green, or  youthful. Wallsend hosted the lions the following week, where the children joined in the revelry, touching the dragon for good luck, laughing and squealing with delight as it cavorted around the library. 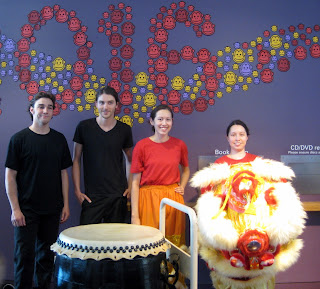 Four members of the Confucius Institute treated Wallsend patrons to a Chinese New Year cooking demonstration, under the live trees of our internal 'avenue'. Jonathon Yi was a most entertaining presenter, cracking jokes while he explained some customs, and why glutinous rice balls with red bean paste are significant. Red, for good luck, round for longevity, and the continuity of the seasons. His three assistants, April, Julia and Maggie, busily prepared the ingredients for the demonstration, amazing everyone with their nifty knife skills, reducing carrots and other vegetables to fine slivers. Patrons were then invited to have a go at making the rice balls, which were then boiled, and the gow gees filled with chicken mince, finely chopped vegetables and spices,  which were steamed. The stirfried fish with Szechuan chilli paste created a fragrant aroma that permeated the library, making everyone very keen to taste the results. They were, of course, delicious. 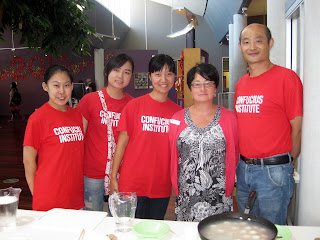 The Chinese paper cutting demonstrated by the incredibly talented Sarah Dunn was extremely popular. Patrons were given tips on how to successfully cut out intricate designs and mount them on colourful paper, then had a chance to try their hand at cutting out pre-printed templates. Naturally, the monkey design proved the most popular.

The Confucius Institute also offered an extremely popular Chinese knotting demonstration. There was lots of laughter as staff and patrons discovered that they are far more involved than your average knot. All persevered until a couple were completed, and many took advantage of offers of one-on-one help. At least one staff member had to have hers 'finessed' by our wonderful hosts, but everyone was happy with their final product, and gained an increased appreciation for the nimble fingers that are required, and the intricate work that is involved. 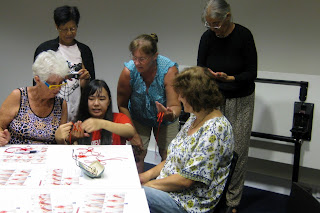 Overall a wonderful two weeks, and we are very much looking forward to celebrating the Year of the Rooster next year. Cock-a-doodle-doo, or wo-wo-wo, as the Mandarin Chinese say!

Visit Newcastle Region Library's website to see what else we're up to!
Posted by Joanne