Human Smoke: The Beginnings of World War II, the End of Civilization 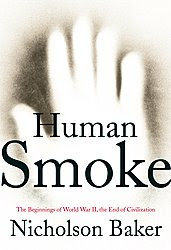 Author: Nicholson Baker Publication Date: 2008 Category: War, History Who'll want to read it? World War II buffs, people interested in insights into human nature Point of no return: pg 1. "Alfred Nobel, the manufacturer of explosives, was talking to his friend the Baroness Bertha von Suttner, author of Lay Down Your Arms. Von Suttner, a founder of the European anti-war movement, had just attended the fourth World's Peace Conference in Bern. It was August 1892. "Perhaps my factories will put an end to war even sooner than your congresses," Alfred Nobel said. "On the day when two arm corps may mutually annihilate each other in a second, probably all civilized nations will recoil with horror and disband their troops.""
Classic line: "Winston Churchill pictured to himself an aerial invasion of England. It was June 29, 1941. A quarter of a million troops might parachute in, or crash-land, or arrive in gliders. The English must be able to respond, he wrote to his chief of staff and secretary of state for war... Every man was to have a weapon - even if only a mace or a pike. "Let me also see some patterns of maces and pikes," Churchill instructed his staff. " pg 350. What's it all about? This was a godsend for me, I have just finished reading a number of books about World War I (I'll have to review some of them - get that 'war' tag up a few more times) and was getting ready to start on World War II. But where to begin? It's hard to tell what sources are reliable and which aren't, and it's a pain constantly trying to weight the value of a book when you just want an introduction into what happened. Fortunately, Human Smoke is just the thing.
First of all, it's not your average history book. It's written as a series of vignettes. The first one is the one I've listed in 'point of no return' - the rather amusing tale of Nobel's optimism. Two world wars and over eighty million dead later we can see how wide of the mark he was. Baker doesn't try to draw a firm line between events, he presents the textual version of the powerpoint slide-show. It's great if you have a lousy attention span like I do, and a refreshing change from wading through page after page of dense writing.
But Smoke differs in how it portrays the War as well. I had not known, until I picked up this book, that there was an active peace movement throughout the war - I always assumed that the English were eager to fight until the finish, Vera Lynn and all that. While the atrocities and outrages of Germany are in no way minimized, the other sides involved in the war did not have their hands clean either, and Baker does not hesitate to show the Allies' warts during this time (Churchill seems to have been the first to bomb civilian targets in the war, he certainly wanted to destroy crops and forest and had no problem starving Europe to defeat Germany).
As for the reliability of this book as a historical source, each and every vignette is footnoted. It's never wise to take a single author's word for how events unfolded, especially a far-reaching and complicated event like World War II, but fortunately Baker has done our homework for us and given us plenty of other books to read once we're finished with this one. This book is simply perfect for beginners to World War II history and probably not bad for war buffs who want to read sometimes amusing, sometimes mad, and sometimes wrenchingly tragic snapshots from the War. Publisher: Simon & Schuster
Posted by Bob No comments: Links to this post 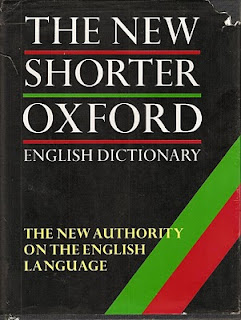 Who'll want to read it? People who need to know the meaning and spelling of various words. Anyone reading a book by Tibor Fischer.

Point of no return: "Entries are listed in strict alphabetical order." pg xi

Classic line: "insidious... a M16.... Full of wiles or plots; proceeding or progressing secretly or subtly; treacherous; crafty." pg 1379 Vol 1.
Another favourite of mine:
"ideology n. L18. 3 A system of ideas or way of thinking pertaining to a class or individual, esp. as a basis of some economic or political theory or system, regarded as justifying actions and esp. to be maintained irrespective of events." pg 1305 Vol 1.

What's it all about? It's a great big list of words, their meanings, origins and pronunciation. It provides a connection with the past, being always slightly out of date. It's not the sort of book to be read from cover to cover, just dive in anywhere at random. Be careful, you may want to look at one word, yet find yourself spending hours being led from one word to another that you've never heard of. Your serendipitous journey may start with you wanting to clarify the meaning of "sycophant", but landing on the wrong page, you are led up a sylvan path, eventually finding that sylvanite is a "monoclinic telluride of gold and silver that occcurs as silver or yellow crystals or masses with metallic lustre". This knowledge is further enriched by the discovery that the word comes from [f. Tran) sylvan (ia a region of Romania ... ]. It's insidious, but in a nice way.

Point of no return: Front cover, because I once had an Terrier cross named Paddy, who was a bit of a wanderer himself.

Classic line: "He was just a dog who captured the heart of a city." pg 215

What's it all about? Set in Depression era New Zealand, this is the story of a dog who made his home on the wharves of Wellington. Paddy's story is aimed at children, but will appeal to anyone who loves dogs. This intelligent and charismatic dog was so well loved that his licence was paid for by wharfies, cabbies and seamen every year. Paddy's adventures include stowing away on coal ships bound for Newcastle and Sydney, rescuing his mates, performing tricks in pubs for food and flying in a Gipsy Moth. The Museum of Wellington City & Sea now houses a permanent "Paddy the Wanderer" exhibit.

Publisher: HarperCollins
Posted by Kieran No comments: Links to this post