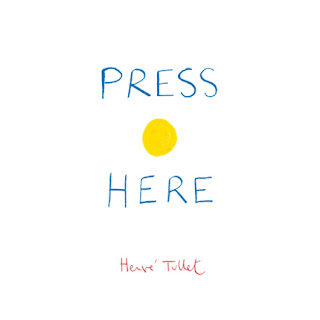 Who'll want to read it? Everyone I have mentioned it to so far.

Point of no return: The title, and the very inviting yellow dot. How can you possibly NOT "Press Here"?

What's it all about? It's an interactive book. When you DO press that one yellow dot and turn the page, it turns into TWO yellow dots. Then three. When you rub the yellow dot on the left (and turn the page), it turns red. Find out what happens when you tap on it five times, or tip the book to the left, or shake the book, or press hard on those dots. And when you CLAP!!

It's such a simple concept, so brilliantly executed, and it is so very satisfying, as a parent, to see a child be more absorbed in this book than they could be with the television or a computer. And so very amusing to show it to other adults, and watch them perform all the suggested actions.

TumbleBooks teach children the joy of reading in a format they'll love. TumbleBookLibrary is an online collection of animated talking children's books, puzzles and games. Each book adds animation, sound, music and narration to existing picture books in order to produce an electronic picture book which you can read, or have read to you.

Newcastle Region Library members can access TumbleBooks at no charge on our web-site. All of the books can be read in English, French or Spanish.

If you have been using the "I Can Read" and "Quick Reads" titles from our branch collections, you will find similar material in the TumbleBooks collection, including Franklin the tortoise and Biscuit the puppy. One of my favourites is Stretch written by Doreen Cronin and illustrated by Scott Menchin. Stretch is about an energtic dog who teaches readers how much fun they can have getting ready to jump, bounce, wiggle or run!
﻿﻿﻿﻿﻿﻿﻿﻿﻿﻿﻿﻿﻿﻿﻿

Posted by Kieran No comments: 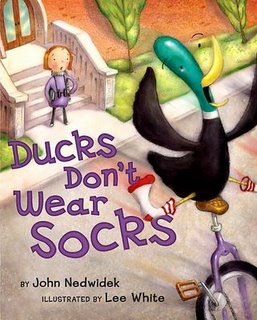 Who'll want to read it? Emilys, parents who have serious kids, duck lovers.

Point of no return: Besides the title, and the cover illustration? It's about one of my favourite people! First line: "Emily was a serious girl."

Classic line: "'A hat?' asked Emily. 'I have never seen a duck wear a hat.'
'Late for the roundup!' yelled Duck. And off he galloped, into the sunset."

What's it all about? Serious Emily meets her complete opposite in Duck, who she first sees riding a unicycle, wearing socks. Duck's outfits get increasingly crazy, but always with a valid excuse: cold feet makes him wear socks; a business meeting sees him wearing a tie. Emily struggles to remain serious in the face of this ludicrous duck, and finally gives in to the absurdity, much to Duck's amusement.

Author: Maj Sjowall & Per Wahloo Publication Date: 1965 Category: Crime, Police Procedural Who'll want to read it?: Crime fans, especially of the police procedural bent. People interested in Scandinavian fiction. Point of no return: "When he put the papers back in the folder and turned off the light, he thought: 'Whoever she was, and wherever she came from, I'm going to find out.'" Classic line: "Finally, Kollberg said: 'That was a flop, wasn't it? Examining that tough guy you went down and mangled?' 'He didn't do it.' 'Are you absolutely sure?' 'No.' 'Do you feel sure?' 'Yes.' 'That's good enough for me.' What's it all about? Roseanna is a police procedural crime novel. These types of crime novels are less concerned with dramatic flourishes and labyrinthine plots, and more interested in gritty portrayals of crime as though they were real. For a good introduction to the sub-genre, hop in to your local library and pick any of Ed McBain's "82nd Precinct" series at random. Or start with this one. It takes place in Sweden, but being written by Swedish authors who didn't seem to have any mind for an international audience, it doesn't come across as a travelogue. Our hero is Martin Beck, and that's what he's called throughout the whole book. You'll see a lot of phrases like, "Kollberg and Martin Beck." I have no idea why the authors chose to refer to him in that manner, but it's grown on me. Martin Beck is investigating a murder, a beautiful woman. But no-one has reported her missing, no-one has seen what happened to her, and no-one knows how she ended up at the bottom of a canal. The clues are filled in, some sooner than others, and all thanks to Martin Beck and a little luck. Luck usually has no place in crime novels - it's a bit of a cheat if Phillip Marlowe was interrogating a tough suspect only to have the murder weapon drop in his lap out of pure chance. But it works well in procedurals because difficult real-life crime cases are often solved with a bit of luck. I was quite absorbed in this book, which is great because I've started and stopped reading a few books this week and was beginning to think I wouldn't have anything for the Book Crowd. If your idea of crime is Ian Rankin or Agatha Christie, do yourself a favour and enjoy a change of pace. You might find yourself in a whole new world of crime fiction. Publisher: Orion Books Visit Newcastle Region Library's Catalogue and Website.
Posted by Bob No comments: