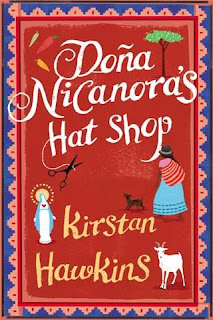 Who'll want to read it? Fans of Alexander McCall Smith, but if you aren't, don't let that put you off. This book captures the same simplicity of spirit, almost to the point of naivety. Instead of being insipid, it questions modern society's accepted motives.

Point of no return: I am a sucker for W B Yeats, and this book has part of one of his poems as the epigraph (my new word for the day!):
I, being poor, have only my dreams;
I have spread my dreams under your feet;
Tread softly because you tread on my dreams.

(From: Aedh wishes for the Cloths of Heaven)

Quite apart from that, however, the second sentence on the first page:
"Despite it's legendary beauty, the town is largely untroubled by visitors as the buses descending into the valley are in the habit of dropping off the road, making tourism a precarious business for the locals."
Picturing all those falling buses (and presumably other vehicles too) really tickled my fancy and piqued my interest.

Classic line: There are really too many classic lines to list here. Suffice it to say that Kirstan Hawkins writes beautifully, picturesquely, and (no doubt through her anthropology studies) manages to capture the complexity of human interactions simply, but emphatically. One of my favourite parts is this, on page 126:
" 'I want to sell hats,' she said. 'I want to sell grand elegant hats like the ladies in the city wear. I want to make the plaza a centre of beauty. I want people to flock here from all over the province to buy hats more beautiful than they ever imagined. You know they say there is a hat for every dream, Don Bosco. I want to fill our town with dreams.' "

What's it all about? Valle de la Virgen is a small town at the edge of a rather voracious swamp. It is home to a host of interesting characters, such as Doña Nicanora and her children, the barber Don Bosco, and more recently Dr Arturo Aguilar, a young doctor from the city, imported by the mayor in an effort to bring the town into the modern world. They have one 'tourist', who is only known as the Gringito (the little foreigner), and is understood only by Nicanora's youngest daughter.

Don Bosco is still in love with Doña Nicanora, who spurned him many years ago for someone younger and more exciting, and has regretted it ever since. Her dreams of owning a hat shop remain unfulfilled, but have been recently revived, with the proviso that she can get the perfect premises - Don Bosco's shop.

Arturo is not really sure that he wants to be a doctor, becoming one to avoid his father's wrath, and to obtain the admiration of a girl he grew up with, who has grown into an alluring and dangerous young lady. He finds himself largely redundant, as the people of Valle de la Virgen rely on home remedies and a local medicine man when they are ill.

I loved this book, mainly for the relationships and personal interactions depicted, but also for the simplicity of life that is threatened by the modern world. The depiction of tourists from other countries and what they really want (I think it was banana pancakes) made me laugh out loud, mainly because there is a large grain of truth in Kirstan Hawkins' observations.

The Lake of Dreams

Who'll want to read it?
Dreamers

Point of no return:
Well, it was more of a feeling. The brother's boat was called 'Fearful Symmetry', which up until now I had thought was a clever title thought up by another Author (my heart is beating) ... it is in fact a William Blake poem (also a name of a band, a Spiderman graphic novel and a X files episode)

Classic line:
(In regards to the Suffragette movement) The rights I took for granted seemed suddenly very new, measured against the centuries.

What's it all about?
Lucy's father died a decade ago and she goes back to her home town to care for her mother and uncovers a secret, hidden in the house's wall cavities.
There was a bit of romance and self-discovery, which was boring, there were 'things unspoken'- in relation to the fathers death, which was mildly intriguing, but the real story was about uncovering and researching the family's past and and learning of the existence of Rose, whose story is tragic and wonderful at the same time. It gave a fantastic insight to the Suffragette movement and it's effect on smaller communities, as well as some insight into women in the church/ religion in the same time period.
The Lake of Dreams was a quick read and kept my interest, I skimmed some of the relationship stuff to find the intriguing parts from about half-way- nowhere as good as 'The Memory Keeper's Daughter', her first novel publisher in 2005. 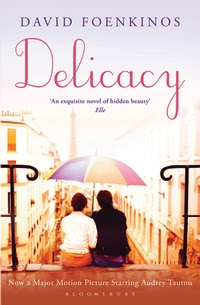 Author: David Foenkinos, translated from the French by Bruce Benderson.

Who'll want to read it? Anyone looking for an intelligent, funny and uplifting story about overcoming loss and finding love a second time.

Point of no return: I wanted to read this because I love this author's style.

Classic line: "For him, she represented a certain kind of inaccessible woman, doubled by the fantasy that some people develop toward all superiors, or anyone in a position to hold sway over them." pg 78

What's it all about?  Natalie is beautiful, happily married and has a succesful career. She loses her husband  Francoise in a tragic accident and is faced with rebuilding her life. Her journey is long, but suddenly her angst disappears and she impulsively kisses a colleague. Natalie's act in the middle of a daydream creates a moment that Markus describes as "the realest of my life." pg 95. The office politics that result are both damning and hilarious.

The novel is full of funny little observations, with more than one person lamenting the invention of wall-to-wall carpet in the office environment and it's dampening affect on sensuality - after all no-one can hear spike heels clicking on carpet. I also loved the situations people created, particularly co-incidences:

"Markus couldn't concentrate. He wanted his explanation. There was only one way to get it: create a fake coincidence. Keep going back and forth in front of Natalie's office - all day if he had to. There'd have to be a moment when she came out and ... bam ... he'd be there, by pure coincidence, walking in front of her office." pg 86.


"... as Natalie arrived at the office, she ran into Chloe. Let's admit it on the spot: the latter was also well versed in phony coincidences. Therefore, she just happened to be walking back and forth in the hallway when she encountered her superior.*"

Footnote: "* We may finally ask ourselves whether coincidence really does exist. Maybe everybody we run into is walking around near us with the underlying hope of meeting us? To think of it, it's a fact that they often seem out of breath." pg 141

Delicacy is an enjoyable book and more uplifting than the beginning makes it seem. Readers will enjoy seeing the "delicacy" in both Natalie and Markus and the unlikely relationship that evolves for them. I can't wait to see the film!

Birth of a Book

I came across this video and thought you might like to know how books can be made.

Birth of a Book from GLEN MILNER on Vimeo.