EBL eBooks are now available for members to use. You can download to an eReader, tablet or smart phone; to a computer; or simply read online.

What books are included, for example?

How do I find EBL?

Links and help sheets are currently located on our main eResources page.
The direct link is: http://library.ncc.nsw.gov.au:2048/login?url=http://nccnsw.eblib.com.au

How do I get into EBL?

Once you reach the login page, you will need to enter an active Newcastle Region library card number and your PIN.

How long can I keep the books for?

You can choose from a 1 to 14 day loan period.
When loan period expires the book will no longer be on your device or computer.
You may download the same book again if you want to.
The same book may be downloaded by several borrowers at the same time – no waiting lists.

You can find a list of compatible devices, applications and eBook readers here.
EBL books can also be downloaded onto the Kindle Fire. For more information see the EBL blog.

You will need to download Adobe Digital Editions to your personal computer (this requires you to create an Adobe account).  For iOS, Android and Kindle Fire you will also need the Bluefire Reader App (this needs to be registered to the same Adobe account) to download and read eBooks directly.
For more information about system requirements visit this link.

Once you are in the EBL portal there is a help link – I have found these very useful. If you can’t find the answers you need, please give library staff a call on 4974 5340, or send a query via our ASK a Librarian link. Use these contacts also to suggest eBook titles or subjects for purchase. 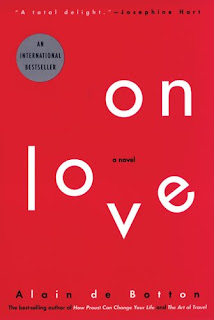 Category: Fiction, although there is a lot of philosophy and other stuff thrown in!

Point of no return: For me, there was no real 'point of no return'. I was drawn slowly into the fictional  romance between Alain and Chloe, but really fascinated by his interpretations of why we do things, drawing quite a few parallels with my own experiences.

A word of warning: this book is not a light read. It has a lot of philosophical content, some mathematics (for example, the probability calculation on pages 8-9, of two random people sitting next to each other on a particular flight), and is basically a non-fiction book in a fictional setting.

Classic lines: "Chloe took off one of the offensive shoes, supposedly so as to let me look at it, but more realistically, to murder me with it; I chose to duck the incoming projectile; and it crashed through the window behind me and fell down to the street, where it impaled itself in the remains of a neighbor's leftover chicken Madras." - pages 60-61

"Dr . Saavedra had diagnosed a case of anhedonia, a disease defined by the British Medical Association as a reaction remarkably close to mountain sickness resulting from the sudden terror brought on by the threat of happiness."- page 123

"We spend our time loving like utilitarians; in the bedroom we are followers of Hobbes and Bentham, not Plato and Kant. We make moral judgements on the basis of preference, not transcendental values." - pages 158-159

"To have killed myself would have been to forget that I would be too dead to derive any pleasure from the melodrama of my extinction." - page 172

What's it all about? Written in the first person, Alain meets Chloe by sitting next to her on a flight back to England. He falls in love with her during the flight, and they agree to meet again. The book chronicles the relationship from the beginning, through the difficult first date, beyond the comfortable familiarity of the seemingly solid relationship, and out the other side - the breakup, and recovery from breakup.

Everything is analysed in great detail, which makes it a little slow going. I commented to a friend that it would be exhausting to over-think everything in that manner, and to have a relationship with someone who thought in that depth would be a bit annoying. It did shine a light on some things that have happened in my own relationships, and made me grateful that I have never swallowed a handful of effervescent vitamin C tablets.
Publisher: Grove Press

To try it out, have your library card ready and type "science experiment" in the search box below. Once you get to our website you will be asked to enter your library card number. You will then have unlimited access to the Infobase eBook collection.