The cool sound of summer - recommended listening in Freegal 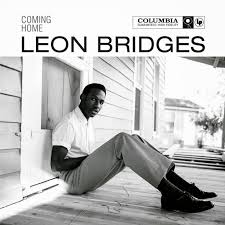 Leon Bridges caused a sensation at his recent Australian concerts with a very slick and classic 1960s soul sound. Inspired by Sam Cook and gospel, the Texan singer brings back upbeat songs of love, faith and redemption and delivers them in a cool vintage suit.

Coming Home, the artist's debut album is featured in Freegal the Library's free music streaming platform. You can also enjoy the soul originals in compilations such as 100 Souls Hits, The Best Classic Soul Hits Vols 1-3 or search for your favourite artist.

Your Library card allows you to stream up to 6 hours of Freegal music a day and download 3 songs per week to your computer or mobile device.

Music lovers can also download recent Australian and US editions of Rolling Stone magazine from the Zinio eMagazine service through the Library's website. Just download the Zinio app from the Apple or Google Play store and register with your Library card.


Do you enjoy Australian fiction? or maybe you want to know more about Australian history than you learnt in school? Does no-one rock you like the Rockmelons? Our libraries have a broad collection of works on, by and for Australians:

It is 1939 and although Australia is about to go to war, it doesn't quite realise yet that the situation is serious. Deep in the working-class Melbourne suburb of Richmond it is business - your own and everyone else's - as usual. And young Kip Westaway, failed scholar and stablehand, is living the most important day of his life.
Kip's momentous day is one of nine that will set the course for each member of the Westaway clan in the years that follow. Kip's mother, his brother Francis and, eventually, Kip's wife Annabel and their daughters and grandson: all find their own turning points, their triumphs and catastrophes, in days to come. But at the heart of all their stories is Kip, and at the centre of Kip's fifteen-year-old heart is his adored sister Connie. They hold the threads that will weave a family.

Henry Parkes arrived in the colony of New South Wales with his young wife Clarinda, and newly born daughter, in 1839. He went on to be five-time Premier of New South Wales, a father to seventeen children and a fierce proponent of the need to federate. Politican, social reformer and newspaper proprietor, Henry Parkes' legacy will never be forgotten.

Up From Down Under: How Australian Music Changed the World

Beginning with Peter Allen’s unlikely journey from the plains of Tenterfield to the stage of New York’s Radio City Music Hall — astride a camel, no less — and charting the rollercoaster rides of the Little River Band, Helen Reddy, the Bee Gees, Air Supply, Rick Springfield, Men at Work, Keith Urban and recent Grammy-winner Gotye, this broad panorama plots the massive influence our tiny population has had on popular culture over the past 40 years.

Funny, exhilarating and a little bit scary; a bewitching blend of Norse mythology and urban fantasy.
Since moving to Australia with their father, Angus Jack and his sister, Martha, have moved house constantly. They end up living next door to a peculiar old lady called Reafen, who is a second-hand dealer. To Angus and Martha, Reafen seems harmless enough. But who is she really and where did she get all the weird stuff in her shop?
Without his knowledge, Reafen draws Angus into her world; into ancient feuds, Wild Magick and bitter rivalries - into the secret dealings of Vikings and goblins and all those who have lived in the Old Realm.

Talking to my Country
Stan Grant

Stan Grant spent many years outside Australia, working in Asia, the Middle East, Europe and Africa, a time that liberated him and gave him a unique perspective on Australia. This is his very personal meditation on what it means to be Australian, what it means to be indigenous, and what racism really means in this country. Talking to my Country is a rare and special book that talks to every Australian about their country - what it is, and what it could be. It is not just about race, or about indigenous people but all of us, our shared identity. Direct, honest and forthright, Stan is talking to us all. He might not have all the answers but he wants us to keep on asking the question: how can we be better?

Bots in The Books

Mechatronics, coding, electronics, soldering, Arduino. All of this and more is happening in the "Mad Science Theatrette" at Newcastle Library in Laman Street.

Bots in the Books represents a collaboration between Hunter TAFE and Newcastle Library and has been generously sponsored by Port Waratah Coal Service.

Members of the public are welcome to drop in to view the activities on Thursday 14th January between 10am and 2pm. For enquiries call Kieran on 4974 5340.

The Lost World Treasure Hunt is running as part of our summer program. Each Library branch has a different Lost World to explore. There is no need to book, simply collect an information sheet, search the library for clues, and solve the mystery!  All successful explorers receive a certificate to celebrate their victorious expedition! So, why not keep the kids busy while you choose a book, or  head to every branch and complete your passport to the Lost Worlds? Happy travels!