The Mammoth Book of Zombie Comics 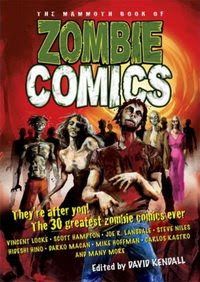 Point of no return: The front cover of course

Classic line: Pg 9, Introduction - The Rise of the Foot Soldier - "The dead rise, rot, and eat. It's the rotting bit that sets the zombie apart from other horror monsters. Vampires are dead too but generally look pretty good on it. Zombies by contrast inspire awe and delight in their lack of beauty and their complete disregard for the safety of their flesh."

What's it all about? It's a collection of comics, long and short, exploring themes of existential crisis within zombie afflicted societies. It includes many grim situations - from the despair of making that final decision when you husband or wife turns into a zombie (In Sickness by Jon Ayre & Stephen Hill) to coping with the necessity of eating live humans in an effort to "fit in" with the zombie crowd to avoid being eaten yourself. There is even a poignant reflection on the importance of toothpaste in one's life when the zombies come ("Zombies" by Kieron Gillen & Andy Bloor). It's a fun book with fabulous illustrations and is bound to make you feel safe and cozy once you've read it! Publisher: Robinson
Posted by Kieran No comments: Links to this post

Author: Hannah Tinti Publication Date: 2008 Category: Fiction Classic line: 'I studied Latin with a man who had no teeth at all', said Tom. 'He always smelled like lavender soap but he was a smart old codger.' 'How did you pay for that?' Benjamin asked 'My mother cleaned his house', said Tom 'She paid for all my lessons that way.' 'Too bad she isn't here' said Benjamin. Tom stopped scrubbing, his mouth set in a line. Then he put the tooth down and reached for the bottle. What's it all about? Ren's name had been sewn into the collar of his nightshirt: three letters embroidered in dark blue thread - Ren, inhabitant of St Anthony's Orphanage, New England, lost his mother? lost his father? lost his left hand - most definitely. But what does the future hold for Ren when he is claimed by his lost brother Benjamin Nab? Hannah Tinti's debut novel spins a tale of mystery, of adventure, of loss and longing, set in the dark and seamy world of nineteenth century America, a tale full of perceptively drawn characters - Benjamin Nab, Tom and Dolly - of dangerous and extraordinary locations. Beautifully written, The Good Thief a very Good Read. Publisher: Headline Review
Posted by Ross No comments: Links to this post

A Fraction of the Whole 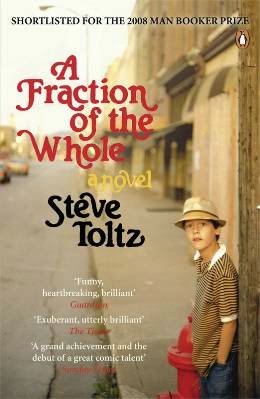 Author: Steve Toltz Publication Date: 2008 Category: Australian Fiction, Literary Fiction Who'll want to read it? Adults willing to commit to a 710 page book. Point of no return: First page: "There's a female guard whose stare of indifference is alluring, but I've never been good at chasing women - I always take no for an answer." Classic line: I could quote you the first 50 pages of this book, each line better than the last, but I'll give you an episode from page 8 where Jasper talks about being raised by his eccentric father: "He taught me if I had to meet someone for an appointment, I must refuse to follow the 'stupid human habit' of arbitrarily choosing a time based on fifteen minute intervals. 'Never meet people at 7:45 or 6:30, Jasper, but pick times like 7:12 and 8:03!' If the phone rang he'd pick it up and not say anything - then, when the other person said hello, he would put on a wobbly high-pitched voice and say, 'Dad not home'. Even as a child I knew that a grown man impersonating his six year old son to hide from the world was grotesque..." What's it all about? Set in Australia, France and Thailand, it's the story of Martin, Terry and Jasper Dean and, if not the Human Condition, then certainly the Australian Condition. It's tragic, it's funny and it's captivating. It even has a Sizzler restaurant in it. Martin and Terry are brothers growing up in a town near a prison. Martin is intelligent, but weird. Terry is great at sports, and obsessive about it too, until a stab wound to his thigh changes all of that. Watch the circumstances leading to young Terry chanelling his obsession in a destructive manner instead. Watch as he influences his brother's and his nephew's lives for years to come. I'm not ignoring Jasper on purpose, it's just that I think I'd give too much away. It really is Jasper's story and he tells it well. If he existed I'd like to meet him, preferably when he sorts himself and his heritage out. This is a fascinating story of cause and effect - seemingly innocent choices made by the characters' wreak monstrous results one after another. I'm so glad I read this book. Publisher: Penguin Books
Posted by Kieran No comments: Links to this post