Join us for an inspiring talk with Jerry Knight as he describes his journey from the Royal Navy to a career in Clinical Hypnotherapy.

Posted by Kieran No comments:

The Janeites by Nicolas Freeling 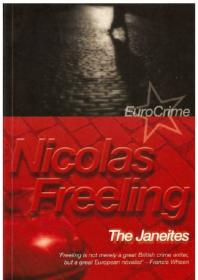 "Believe me. There's no-one like Jane in a tight place." Nicholas Freeling, The Janeites, page 43

Where has Nicolas Freeling been all of my life? I recently finished The Janeites, the last book he wrote before he died in 2003. Oh woe. Now I need to track down the rest of his books, starting with Love in Amsterdam starring Inspector Van Der Valk.

When I started The Janeites I thought I'd stumbled upon a weird or badly edited novel. So I slept on it and started again the next day. Within two chapters I never wanted to the leave the world of Dr Ray Valdez and William and Josephine Barton - Janeites all three. Ray is "no Superman ... but has a talent for winning. In the research world, where they seek to grip on the crab he is not thought of as an unusual technician. The Oncology people hold him in respect because he has a talent betimes thought uncanny: he can often outguess them when the crab - a champion at this game - looks to be winning.".
This comic novel touches on the political worlds of Paris and Strasbourg, with a dash of romance and intrigue. Josephine has left William because he is "too good", but later she finds out he has "the crab" (cancer).  "Crab" genius Dr Ray Valdez prescribes green tea and readings from Jane Austen. The crab recedes. Many adventures for the three are entwined in this story. Affairs of the heart, a dangerous descent, jealousy, a bashing, retribution and naïve misplaced revenge. It doesn't end well for everyone...

Library members can borrow The Janeites as an eBook. For assistance call any of our branches.


Posted by Kieran No comments: