The Casual Vacancy - a review by The Bookchook 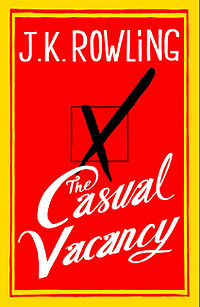 What's it all about?

J.K. Rowling's highly anticipated first novel for adults, The Casual Vacancy, was launched amidst high media publicity and has had mixed reviews. The Casual Vacancy is a grim novel dealing with the realities and ugliness of modern life but there is none of the magic so beautifully crafted in the Harry Potter novels. Instead, Rowling has used her latest work as a tool to promote social good.

The novel is set in the small English village of Pagford and follows the political and personal fallout created by the death of Barry Fairbrother, a member of the parish council, a good man, with a mission to engage those less priviledged in society. The election brings to the surface simmering tensions over class, family and status, in a place of secrets, poisoned by "things denied, things hidden and disguised."

There is little to love in this work. The characters have few redeeming features. There's the extravagantly obese councillor, Howard Mollison, disaffected youths Fats and Andrew, and the real hero of the novel, skanky Krystal Weedon - "funny and tough; impossible to intimidate; always coming out fighting." This is a world far removed from Hogwarts, dealing with drug addiction, self-harm, rape, suicide and domestic violence. Not suprisingly, the adolescent characters are drawn with much greater depth and compassion than the adults in the novel.

This is a long book, with not a lot happening in the beginning. The action picks up on page 240 and from there the reader becomes immersed in the scandals unfolding in Pagford and the trouble-plagued council estate, The Fields. As the election spins out of control and the plot plunges toward a tragic ending, the covers of middle-class decency are ripped away to reveal the true ugliness beneath.

The Casual Vacancy is a thought-provoking read. It is overly long, but worth the effort of getting through the first-half. Rowling's message of the need for social good shows that we are all our brother's keepers - we should all take care of each other, regardless of our social standing. Which isn't really so different, after all, from the world of Harry Potter.

Welcome to one of our NEW regular posts on The Book Crowd!

Every second month one of our staff will share some books that have delighted and intrigued them and you, our dear reader, may discover something new...

Gaysia :  Adventures in the Queer East by Benjamin Law
In his second book Ben takes on a journey to find out what it is like to be LGBT (Lesbian, Gay, Bisexual and Transgender) in countries throughout Asia. This is a fascinating and enlightening read, taking me from tears to laughter from one line to the next. Ben has a wonderful way of capturing personality and emotions in his writing and you really feel the personal experience in each story. From Ladyboy beauty pageants in Thailand to sham marriage social network sites in China to heartbreaking stories of people who simply want to be themselves without shame and persecution from their families and culture. This is a wonderful read and another brilliant piece from one of my favourite writers.

For more information about Ben, this book and his writing visit his website:
http://www.benjamin-law.com/gaysia/ 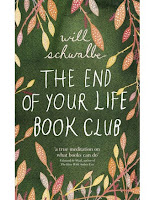 The end of your life book club by Will Schwalbe
This is the wonderful and moving story of Will and his mother Margaret, her battle with cancer, their love of books and their connection through reading and all the knowledge, inspiration and courage it can give us in life. Each time Margaret goes for chemotherapy treatment, Will comes with her and they end up discussing a great many things but most often it is based around the question 'What are you reading?'. Eventually, as Margaret's treatments continue they start to pick the same books to read and use these strange and difficult blocks of time together to discuss them like a book club. I am still reading it and it is lovely...

The Convent by Maureen McCarthy
Maureen McCarthy has been a favourite of mine since I was in my teens. Queen Kat, Carmel and St Jude has seen me through countless rainy days and tension filled Easter long weekends! So of course I had to check out her latest YA novel The Convent. This story is based around Peach, a young girl who is taken on a journey of self-discovery when she starts working at a cafe in the Abbotsford Convent. Here she uncovers family secrets and is challenged in ways she never imagined. I confess that I have only just started reading this but I know it will be delightful and very soon it shall consume me completely as Maureen's books always tend to do. I urge anyone to read Maureen McCarthy's writing, remember young adult books are not just for young adults and these days they are some of the best reads out there.

This book is available as an EBL eBook. You can search for it and other wonderful eBooks below:


Here are some of the latest eBook titles available free to members of Newcastle Region Library:

Gently with the Ladies by Alan Hunter ,  Constable & Robinson

I Made Lattes for a Love God by Wendy Harmer ,  Allen & Unwin

The Taming of Annabelle by  MC Beaton , Constable & Robinson

Non-Fiction
Bus Stop and the Influence of the 70s on Fashion Today by Lee Bender , A&C Black

To borrow these books visit EBL here
or use the search box below. You will need your library card number and PIN.

If you have any questions call the library staff on 02 4974 5340.
Posted by Kieran No comments: Links to this post