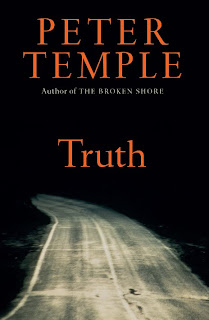 Author: Peter Temple Publication Date: 2009 Category: Australian crime fiction Who'll want to read it? Crime fiction lovers who don't mind a bit of a challenge. Point of no return: There is no way this book would go un-read by me! I've been very excited since I heard Peter Temple was releasing a sequel to The Broken Shore. Even though it is a sequel, it does stand alone as a separate story. I was rather pleased to see that Joe Cashin's poodles managed to get a mention in Truth. Peter Temple obviously knows a good dog when he sees one.

Classic line: "The Herald Sun front page had pictures of Kidd and Larter, mug shots, the lagophthalmic psycho child-molester serial-killer look all men had when their driver's licence photographs were enlarged six hundred per cent." pg 213 What's it all about? The story is about Stephen Villani, Homicide boss who we met briefly in The Broken Shore. According to his Dad, Bob Villani, Stephen has always had a "boss manner" that made some a bit nervous. Lots of people have lots of reasons to be nervous in this story of revenge, murder, torture and abuse. To top it all off, the worst bushfires in memory are threatening Bob Villani's farm outside Melbourne and Villani's 15 year old daughter is missing on the streets of St Kilda. I love the way Peter Temple is so sparse with his dialogue and explanations - sometimes finding the meaning is like deciphering a code. It takes a couple of chapters to get into the rhythmn, but it's worth it. Truth is a fabulous read, one that kept me up all hours and even beckoned to me at 3 am. I can finally get some sleep now that I've finished it! Publisher: Text Publishing
Posted by Kieran

I had no idea he wrote a sequel. Some great library lady I am! I only read the first one because it had my namesake in it, but really enjoyed the ride (and the un-approachablility of my namesake). Can't wait to find out what else he gets up to!

I know, I really wanted to follow Joe Cashin's story as well, but there isn't much to see of him in this book. It makes me wonder who Peter Temple will focus on next time. Maybe Dove? That would be intersting.