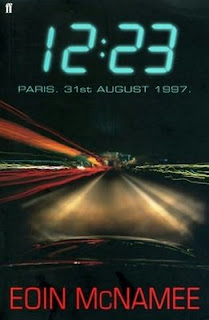 Author: McNamee, Eoin Publication Date: 2007 Category: Literary suspense Who'll want to read it? Conspiracy theorists. Point of no return: Having read Eoin McNamee's last 4 books, reading this was a foregone conclusion.
Classic line: "The thing he liked about tailing someone was that it added an extra dimension to the subject. He liked to think of himself as bringing ambiguity and drama to people's lives" page 5. What's it all about? Eoin McNamee possesses a certain mastery in writing novels based around actual people and events. 12.23 is set in Paris on the weekend Diana Spencer died. It is a fictional account of the lead up to the fatal accident in the Alma tunnel. We see most events from the point of view of a washed up ex-special forces operative employed to "watch and report" on people connected with Diana Spencer. McNamee portrays a chilling world of espionage and corruption - a world in which to "sanitize" is to remove all protective surveillance from the vicinity of a subject, leaving assassins clean access to their target. The story explores some intriguing possibilities about the weekend of "Spencer's" death (as she is continuously referred to in the novel). McNamee's ability to portray the inner nuances of so many different characters creates a rich and plausible cast. Even if you don't like the topic, you will be entranced by the atmosphere created.
Publisher: Faber and Faber
Interview with Eoin McNamee from the Belfast Telegraph, 23.09.2007: