The aim is to foster links of friendship, culture, education and tourism, hopefully leading to economic links and benefits. Of all the reasons why towns and cities and their citizens might wish to communicate and exchange, what better reason is there than where we share the same name?

There are also many Newcastles in the non-English speaking world and, following a visit to Newcastle-under-Lyme, it was the Mayor of one of them, in Shinshiro, Japan, who took the initiative to bring the Newcastles together via the Newcastles of the World summit, the first taking place in Japan in 1998 with delegates from Newcastle (South Africa), Neuburg-an-der-Donau (Germany), Neuchâtel (Switzerland). New Castle Indiana (USA), New Castle Pennsylvania (USA), Newcastle-under-Lyme (UK) and Neufchateau (France) joining their hosts in Japan. 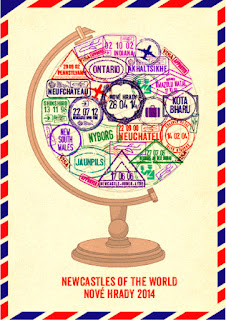 Our very own Newcastle, Australia has jumped on board to share information and stories with our fellow Novocastrians. You can read the bi monthly newsletter and also contribute to forums which connect and exchange information as well as best practice. If you have any ideas for Newcastles of the World - get involved, Newcastle Library would love to hear about it.

The next conference will be held in Newcastle, Ontario, Canada from 19-23rd September 2016 and Newcastle Region Library thinks we should start campaigning to bring the Newcastles of the World Summit down under to Newcastle, Australia for 2018!