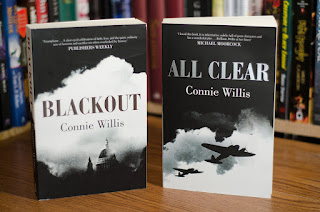 Oxford in 2060 is a chaotic place, with scores of time-traveling historians being sent into the past. Michael Davies is prepping to go to Pearl Harbor. Merope Ward is coping with a bunch of bratty 1940 evacuees and trying to talk her thesis adviser into letting her go to VE-Day.

Polly Churchill’s next assignment will be as a shopgirl in the middle of London’s Blitz. But now the time-travel lab is suddenly cancelling assignments and switching around everyone’s schedules. And when Michael, Merope, and Polly finally get to World War II, things just get worse. For there they face air raids, blackouts, and dive-bombing Stukas--to say nothing of a growing feeling that not only their assignments but the war and history itself are spiralling out of control. Because suddenly the once-reliable mechanisms of time travel are showing significant glitches, and our heroes are beginning to question their most firmly held belief: that no historian can possibly change the past. Look out for the next book 'All Clear' after you devour 'Blackout'!

Who'll want to read it?  Anyone delighted to see any new book by Connie Willis, but particularly one that returns to the time-travel premise she explored so deftly in classics such as Doomsday Book.

Classic line: “I’m not studying the heroes who lead navies—and armies—and win wars. I’m studying ordinary people who you wouldn’t expect to be heroic, but who, when there’s a crisis, show extraordinary bravery and self-sacrifice. Like Jenna Geidel, who gave her life vaccinating people during the Pandemic. And the fishermen and retired boat owners and weekend sailors who rescued the British Army from Dunkirk. And Wells Crowther, the twenty-four-year-old equities trader who worked in the World Trade Center. When it was hit by terrorists, he could have gotten out, but instead he went back and saved ten people, and died. I’m going to observe six different sets of heroes in six different situations to try to determine what qualities they have in common.”