The Boundary by Nicole Watson 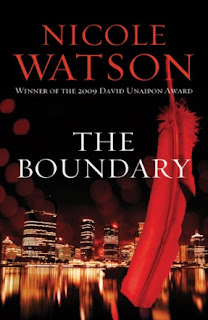 Long ago, Meston Park in Brisbane's West End marked the city's boundary. A curfew kept its Aboriginal population outside the city limits after dark. A multi-million dollar development threatens the sacred site of one of Australia Aboriginal populations, the Corrowa people file a native claim over the site. Hours after Justice Brosnan rejects the claim, he is dead. Days later, the developer's lawyer is also killed. As the body count rises, it becomes clear that the key to unlocking the murderer's identity is the single red feather left behind at each crime scene.

Filled with suspense and grisly detail, this book follows detectives Jason Matthews, a young Aboriginal policeman, and Andrew Higgins, a wizened cop possessed by his need for revenge, as they attempt to investigate the murders and stay impartial. A fast-paced crime novel as well as a cutting social commentary, this narrative puts native title and contemporary Australian issues under the microscope, exposing a nation still struggling to come to terms with its bleak past.

Who'll want to read it? Crime novel lovers - this is breaking new ground in Australian fiction.

Point of no return: It may have a body on the first page, but this is no ordinary crime novel. Nicole watson adds generous slices of Brisbane's Indigenous history, and a supernatural being called Red Feathers... you won't put it down.

Classic line: ‘...if you wanted to have a yarn with a blackfellas – you have to fill them up with tucker first.’