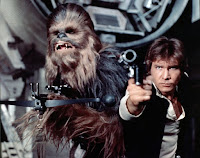 It's no surprise Star Wars fans have declared 4th May to be Star Wars Day, taking one of the most popular movie quotes of all time ("May the force be with you") and transforming it into a pun (May the fourth) that fans worldwide use to celebrate possibly the most loved space opera of all time.

The first recorded use of "May the Fourth Be With You" dates back to 1979, 2 years after the original Star Wars installment was released, when a London paper used the phrase to congratulate Margaret Thatcher's election as British Prime Minister on the 4th May. Now, the day is used by fans to celebrate and binge on all things Star Wars and there is no lack of resources to get your fix - the official Star Wars universe comprises not only the 7 movies released thus far, but animated series, books, graphic novels and games. There are plenty of great spin offs to get into as well, such as the hilarious Lego Star Wars movies - in particular check out 'The Padawan Menace' and 'The Empire Strikes Out'. Plenty more from the Star Wars universe can be found on the Newcastle Region Library catalogue. If that's still not enough to keep you going, you only need to wait until the end of the year for the new movie 'Rogue One: A Star Wars Story' to be released.

As Star Wars canon is ever expanding, you'd be forgiven for losing track of characters and their relationships to each other. There are some great online resources to help you navigate this galaxy of intrigue including Wookieepedia, a Star Wars encyclopedia
contributed to and edited by fans.

And if one day of celebrating Star Wars isn't enough for you, you can carry on tomorrow and celebrate the 'Revenge of the Fifth' ;-).