The Private Diary of Mr Darcy 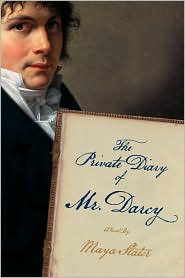 Publication Date: 2009 Category: Fiction Who'll want to read it? Pride and Prejudice fans who are prepared for Darcy to be a real man. Point of no return: I was immediately taken in, mainly because of Darcy's references to Caroline Bingley's attentions, and seeming oblivious to her intentions. Classic line: page 215: "We were discomforted when, after dinner, the 'monks', by now well in their cups, began to throw off their habits, beneath which they were naked as Adam & Eve. It seemed that we were to experience a full-scale orgy. Charles objected that such an event was peculiarly unsuited to the Sabbath. 'That is precisely the point,' retorted Byron." What's it all about? It's exactly what it says it is - the diary of Mr Darcy, from his time at Netherfield to a month before his marriage to Elizabeth. I loved this book, for a variety of reasons. It adds depth to Mr Darcy's character in a manner of surprising ways - his friendship with Lord Byron being one example of these. It also gives insight into what a gentleman of the time was expected to do, by the larger population and by his peers. Slater also placed the novel(s) more firmly in time by mentioning events of historical significance that a gentleman would be interested in. The novel challenges the reader's preconceived ideas of several characters, Darcy included, and goes places that Jane Austen would have been to mortified to tread. Publisher: W. W. Norton & Company
Posted by Joanne