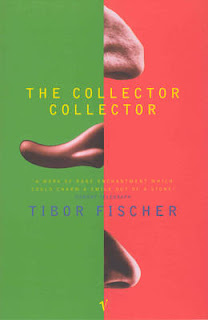 Author: Tibor Fischer Publication Date: 1997 Category: Humour, Literature Who'll want to read it? People who like a laugh looking for something different. Point of no return: "Lugals aren't strong on humour. Power rarely has a use for humour. They don't have much interest in being entertaining or popular. This one tries to act as if he has; a project perhaps to help him imagine that people are drawn to him for his charm and wit and not his integrity-crushing riches. There are lugals like that." Classic line: (referring to a blind date for his 'collector' - you'd better see my comments below if you want to know what I mean) "Teacher: not a good sign. Few people go into the profession because they want to. They're failed somethings: bank robbers, conductors, pilots, people who never found their way out of the educational system. A teacher of English to foreign students: even worse. Someone whose only employable trait is having been born in a country where the language happens to be in demand." What's it all about? This book is literature's best-kept secret. It's narrator is a vase, old as history itself, which can change shape and gets itself collected by interesting (and sometimes interestingly dull) people throughout history: it's a collecter of collectors. His latest 'acquisition' is a lugal (someone who is filthy rich and irredeemably corrupt) who, suspicious that the narrator is a fake while not realising just how unique 'he' really is, gives him to an authenticator named Rosa. Unfortunately for the narrator, Rosa is psychic, and can sense that the collector collector isn't all 'he' seems.
Fischer's command of the English language is fantastic. He peppers his book with words rarely used in books (crystalelephantine, stercolith, and of course lugal), yet his writing is not impenetrable. Far from it, once you read the first page you'll be utterly addicted. Collectors in particular will get a kick out of the narrator's habit of categorising everything 'he' sees (there are 166 different types of noses). If your library doesn't have it, order it. This book is unmissable. Publisher: Vintage
Posted by Bob