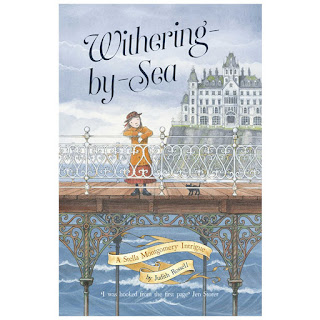 Eleven year old Stella Montgomery resides at the Hotel Majestic in Withering-by-Sea with her three terrible Aunts. Set in Victorian times, the Aunts are 'taking the waters' and  partaking of other water treatments designed to increase health and vitality, and attempting to teach Stella correct deportment, manners and other accomplishments suitable for young ladies in between these treatments.

One night, as Stella is sneaking out of her room to recover her Atlas (of which the Aunts definitely would not approve!), she witnesses something terrible, and is plunged head first into an adventure (which includes singing cats, magicians and dancing girls, among other things).

Be warned - this is the first of a series, the second is in the process of being written, and you WILL want to know what happens next! Don't let that put you off though. The next one, Wormwood Mire, is due out in October!


Who'll want to read it? Aimed at children aged 9+, fans of Lemony Snicket, the Wildwood Chronicles by Colin Meloy and Carson Ellis,  and Tensy Farlow by Jen Storer will really enjoy this.

Available as a hardcover book, or as an eBook.
Find it now, at Newcastle Region Library's Catalogue and Website.
Posted by Joanne