Eve and the runaway unicorn by Jess Black 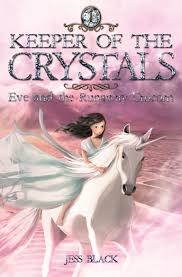 Feeling bored, Eve explores her Nan's attic. Here the discovery of an old chest and the crystal figurine of a unicorn, transports her into a new world, where Eve and her unlikely/reluctant friend Oscar, meet people in need of their help. Opening the chest has also unlocked the power of a crystal and Eve finds herself with strange new powers and linked to an ancient prophecy to overthrow the evil king and his rangers.

Eve and the Runaway Unicorn  is the first book in Jess Black's new Keeper of the Crystals series. In each book the pair are thrust into different and dangerous worlds where unicorns, tigers, dragons and panthers communicate with people and where native communities and their way of life are under threat. Only Eve, the crystals and her new powers can save them.

Jess Black is well known for her Bindi Wildlife Adventure series, the RSPCA Animal Tales series and The Kaboom Kid series with David Warner. This new series will expand and delight her fans.

With a strong resilient female character and an ecology message, this series will be enjoyed by children 7+.