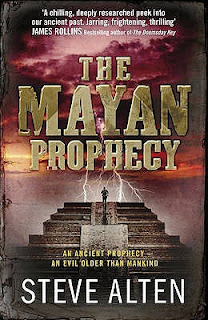 Who'll want to read it? People who like conspiracies, end-of-the-world fiction, and are willing to take their history with a grain of salt.

Point of no return: Dinosaurs and aliens! After a description of alien battle, on page 10:
"In deadly silence, the pack of Velociraptors closes around its prey, a 31-foot-long female Corythosaurus."

What's it all about? The Mayan calendar ends on 21 December 2012. Archaeologist Julius  Gabriel works his entire life to ensure that this does not mean the end of the world, or the end of the human race. He dies, failed. His only hope is that his son can carry on his work, unravelling the mysteries of the tall, bearded Caucasian teachers in history, who were instrumental in the building of the pyramids of Egypt and Mexico, the Nazca desert drawings, even Stonehenge. But his son, Michael, is locked in an asylum. The fate of the world now rests in the hands of his new psychiatrist, Dominique Vazquez, who may be the only one who believes he wrongly incarcerated.

This is an action-packed, history-filled, flight of fancy, that stretches the imagination and takes you on a journey from deep outer space to deep underwater. It is well written, well researched, and well imagined!